The College still possesses minute books going back to the society’s first meetings.  The painstaking work of transcribing them has been undertaken by several Sidney undergraduates over the years. 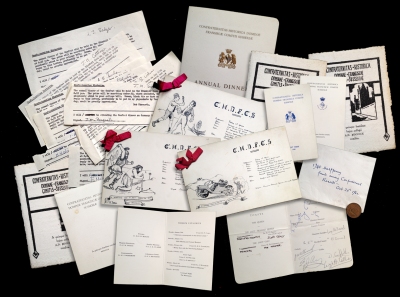 Term cards, invitations and menus from the early years of the society. © Richard Sowerby

The entries from 1910 to 1957 have been digitized, and are available via the links below. As well as being of interest to past and present members of the College, who might like to see how their predecessors spent their own student days, the records provide a valuable resource for the social and cultural history of the early twentieth century. There are reports of the meetings themselves, describing the topics under discussion, which reveal something of the changing tastes and fashions within the historical profession. There are records of disputes about the openness of the Society to women and the food available to students in inter-war Cambridge. In the entries from the 1940s, there are also scattered references to the progress of the War, including contemporary reflections about the rise of the Nazi party and other events overseas.